We have just concluded the 2015 fishing season in Madeira, and without any doubt the summer of 2015 proved to be the best for many years.  Even though this season could not quite rival the amazing fishing of the mid-1990's it was still one heck of a good year for Madeira with good runs of the giant blue marlin that the island's waters are world-renowned for.

We fished a total of 81 days this summer during which time we saw 115 blue marlin out in the deep. 52 of these fish actively entered the spread and we managed to hook up to 41 fish out of 48 bites where we actually made it to the fighting chair; our final tally of catches was 30 releases. I was truly amazed at the amount of fish that we saw from the tower. There were plenty of fish that never bit but we often saw hanging about the huge bait shoals near the 100 fathom curve.

Madeira has always been very unpredictable and one can never guess which month would provide the best fishing. This season it all started in June with the first arrivals being caught around the Ponto do Pargo area. The Pesca Grossa was struggling in the early part of the season - probably due to an annoying vibration from our starboard engine. We managed to sort out the problem towards end of June and by the first of July we got into the game of catching.

Straight afterwards,  we had the best five days fishing that we have experienced aboard the Pesca Grossa. Between July 6th to 10th, fishing with two friends from England - Tim Lambert and Stephen Parkinson - we released 11 blue marlin which ranged in size from 400 to 1050 pounds. We measured the biggest fish at 141 inch short length, with a 77 inch girth. We also had another really nice fish that we called 950 ,and another eight fish that ranged in size from 900  down to 500; one was a comparatively small fish at 400 pounds. 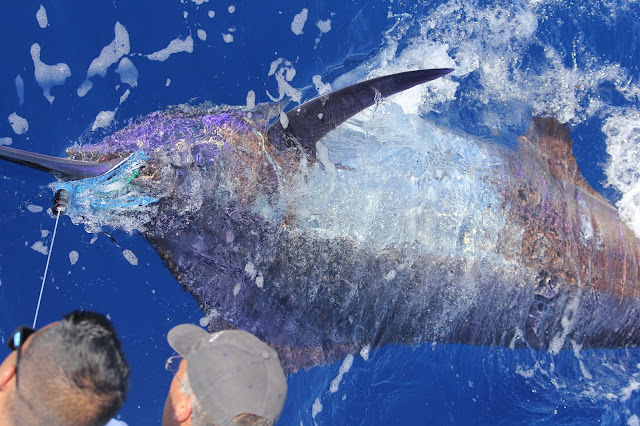 In total we fished 21 days in July and released 23 blue marlin of which 20 were over the 500 pound mark.

Unfortunately we then blew a head gasket on the boat which put us out of commission for eight days, and by the time we got her going again the fishing was starting to slow down. Nevertheless, we did manage to catch a few good fish in August and we went 1 for 4 in September,  releasing a total of 30 fish for the season.

Other species; the big-eye tuna never showed up in good numbers though we did manage to land four that ranged in size from 165 to 300.  We also landed several nice mahi-mahi (dorado or dolphin fish), one wahoo and we also released seven white marlin. 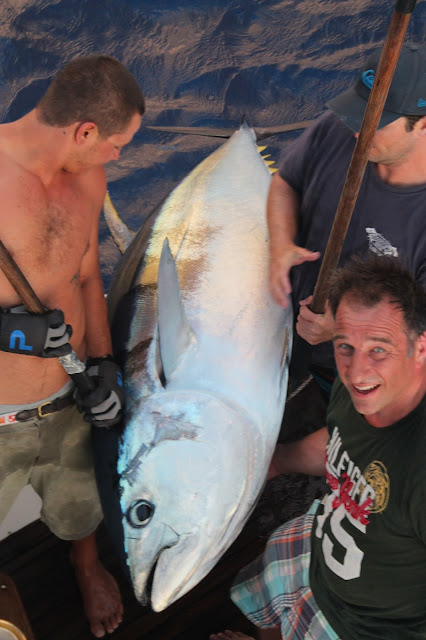 I suspected that 2015 would be a good year even before I left for Madeira. Capt Roddy had told me that the fishing was sometimes better in Madeira when the El Nino was in effect and it certainly seemed that way. Hopefully it will last long enough for another good year in 2016 !

Hope to see you there, and if you'd like a shot at a giant with us, drop us a line on hardplayfishing@gmail.com  for further information and availability.